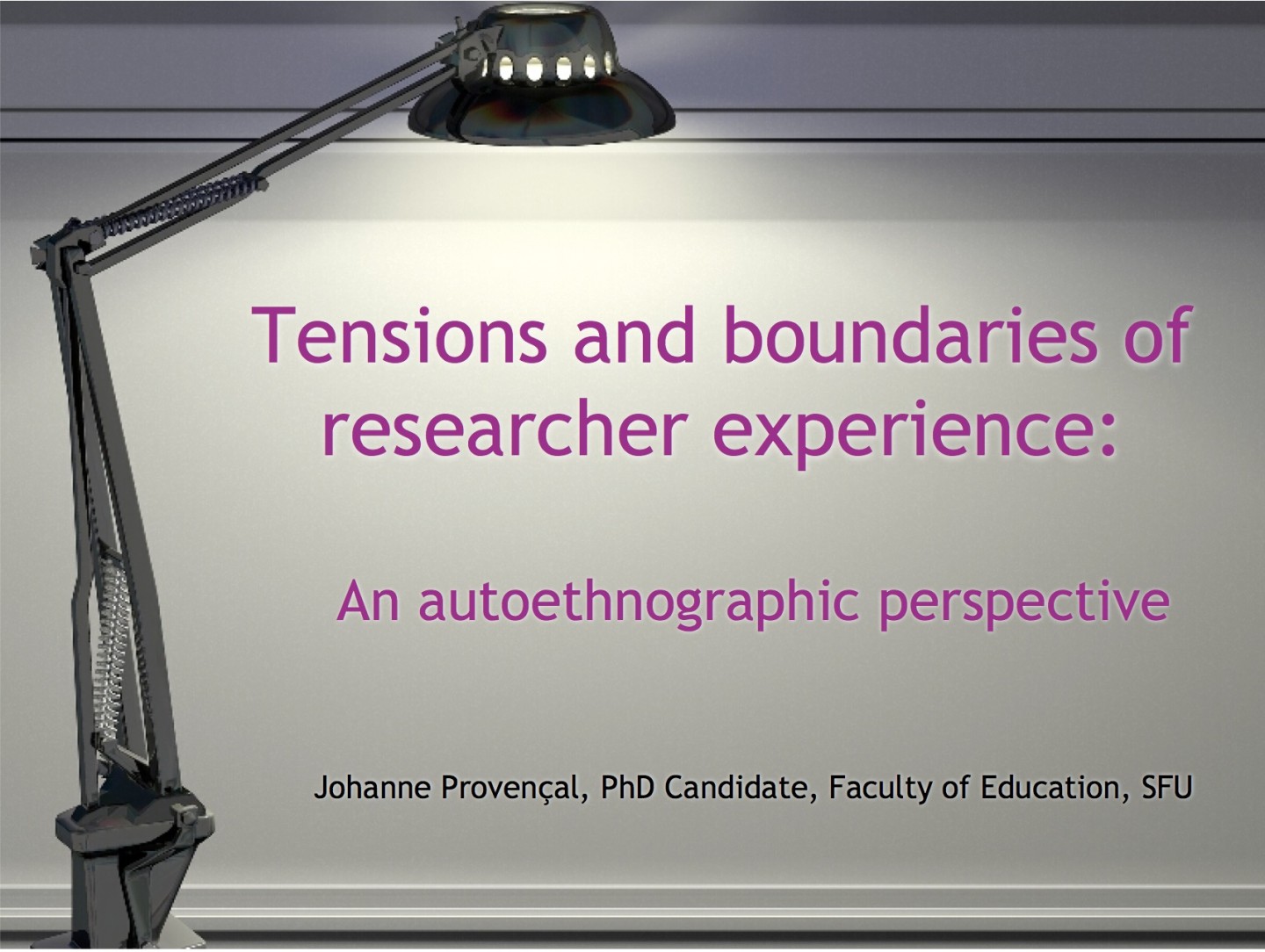 An autoethnographic miniature on the tensions and boundaries of researcher experiences

Across disciplinary and methodological boundaries, conventional wisdom holds that the best research often originates from an intimate interest of the researcher. Yet, the standard approaches of method and genre of the research literature rarely convey the intimate nature of the work and experience of research. There is a contradiction here, a missing link of a sort, which positions and characterizes the researcher as little more than part of a finely tuned research machinery. One problem of characterizing a researcher as a kind of machine is that doing so fails to identify as strengths or sources of insight the flaws (or even breakdowns) that are intrinsic to the imperfect mechanics of research done not only on human “subjects” but also, by human “subjects.”

Autoethnography permits in ways that other methods do not, a revisiting of the questions and answers of what it means to conduct research, for the researcher and the researched, both. As with any other research method, there are reaches and limitations to autoethnography; however, it can provide perspective not only on what matters and/or happens in the conduct and in name of research, but also, it contributes to a discourse that extends what is possible in the presentation, analysis, interpretation and understanding of scholarly research.

Autoethnography was introduced to me in the first semester of my PhD program and truth be told, I struggled with a resistance to the ideas presented by autoethnography.[i] It is also worthwhile to note that there have been varying approaches to authoethnography: as an approach to pedagogy (Banks and Banks); as a personal ethnographic genre (Crawford); as interpretive or performance ethnography (Denzin); as a critical self-inquiry (Pelias); and as a “field of play” for both inquiry and the textual genres of communicating research (Richardson). My initial resistance to authoethnography led me, however, to take a more structured approach to the method than what I encountered in the literature.

I designed a preliminary autoethnographic framework and protocol by integrating standards from both ethnography and case study methods (Bassey; Graham; Hamel; Merriam; and Yin) and from this literature I took particular note of the distinction made between what to observe and how to observe (see slide presentation document in the table of contents). In my preliminary response to the protocol, my observations became notably multi-dimensional (the question of who I am and what was happening, for example, became complex in a way that it might not have if I had been observing a research subject other than myself). Similarly, the questions of how I observed became notably nuanced (for example, the boundary between how I observed through my sensory faculties versus my intuition became blurred, as did the boundary between my tacit and explicit knowledge).

…teaches us about ourselves…it affirms our subjectivity, challenges our assumptions of normalcy…and it forces us to be more self-reflexive…[it] introduces a new form of scholarly writing…[addressing] our need to inculcate and model a critical attitude and self-disclosiveness in our teaching and learning, not just with our students and colleagues, but also with our institutional administrators. (Banks & Banks, 235-236).

Revision of the autoethnographic protocol (the adding of dimensions) was something I chose to do because I had experienced precisely what Banks and Banks describe: as a doctoral student, I found the academy to be a place where assumptions about what it meant to be a scholar and/or researcher (and to do scholarly research) seemed often left unchallenged (and how ironic, if not hypocritical this was, given what research and scholarship claim to be). Similarly, I also found unchallenged assumptions (that fell under the title of “standards of the tradition,” but these were assumptions nonetheless) about form and style in scholarly writing (my difficulty with this was derived from what I had learned from a community of literary publishers, where challenging standards of form and style was what kept literature relevant and representative of the time and place in which it was written).

When I revisit the protocol, which I do from time to time, to question myself and to examine my approach to the work I am doing (and the life I am living), the resistance I had to autoethnography returns to me—but it is changed, something is uncovered. My resistance to the autoethnographic protocol is no longer a resistance that comes with thinking that it has nothing worthwhile to contribute. My resistance to the protocol is a resistance to what is in the data. It is not always what could be described as a pretty picture: of myself or my experience of the academy. The reason why I put this to paper, in essence, is because I think it is worthwhile to revisit (and in different ways) the questions and answers of what it means to conduct research, to conduct myself (oneself?) as a researcher. Autoethnography not only revisits those questions and answers, but calls on the researcher to pose the question: If I were to ask myself these things, what would I answer? My answers are perhaps insignificant to anyone other than myself. Of significance, I would argue, are the questions of the protocol and the kinds of tensions of researcher experiences that autoethnography confronts, both as a method of inquiry and as a genre through which to convey what are often the unsaid and unseen nuances and complexities of what it means to conduct research, of what it means to be in the academy.

This “autoethnograpic miniature” is intended as an invitation to others to consider how their own autoethnographic practice could serve as a looking glass, if not a method and genre, in their research, in life and work in the academy. The snapshot presented here is also intended as an attempt to contribute to the discourse of those who diversify the questions that research asks, the ways of asking questions, and the answers given; and further, it attempts to join those who look more closely at the academy and the people who inhabit it, myself (ourselves?) among them. 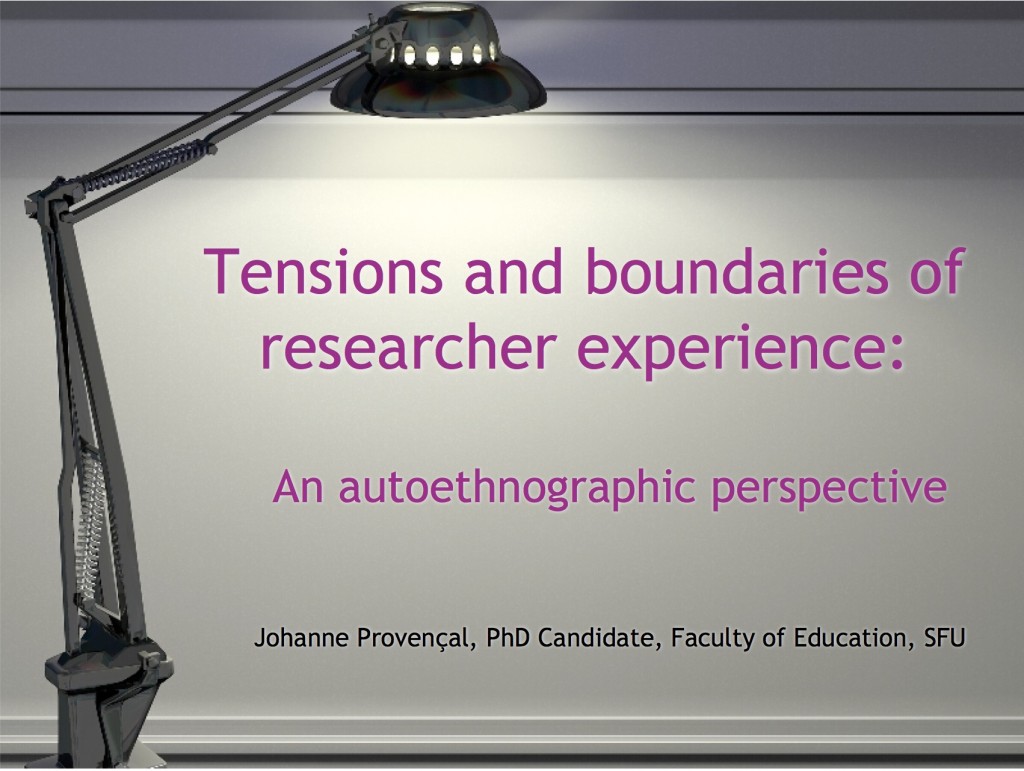 I would like to thank Heesoon Bai for inspiring this work and for inspiring me throughout the resistance and struggle, but also the triumph and celebration, that is unique to the experience of pursuing a PhD and entering academic work and life. Indeed, the academy is a more human place with her work and presence in it. I would like to thank Suzanne de Castell for introducing autoethnography to me as a method and for encouraging me to take up the challenges it presents. I would also like to thank Will Garrett-Petts and others involved in the CURA conference for the opportunity for me to present this work and to become part of the CURA community—an inherently self-reflexive research group.

Johanne Provençal is a PhD Candidate in the Curriculum Theory and Implementation program in the Faculty of Education at Simon Fraser University.

[i] When introduced to the idea of autoethnography as method, my knee-jerk response was to cry out, “No thanks! I have been living with myself my whole life and the last thing I am interested in is studying myself. Besides, who cares? I don’t even care about myself as a research subject, so how could this possibly be useful to anyone?” As I began to work through the literature in the field of autoethnography, however, this resistance was soon replaced with curiosity.

[ii] Adding these dimensions was inspired by Heesoon Bai, my PhD supervisor, who on the very first day of my first doctoral seminar, called on more than the intellect to enter the room, and she named specifically these dimensions—the physical, emotional, psychological and spiritual—as important and legitimate dimensions of personhood and inquiry, to enter into our seminar discussions on philosophical and theoretical frameworks and questions in the field(s) of education.

And So It Was Written